We wanted to see how easy it would be to integrate IB with Github Actions and behold…thanks to the great work of our DevOps expert Ori Hoch - we got it to work!
Check out his post below…

Would love to hear if anyone else out there would benefit from such an integration, tried it this way or had success doing it another way.

Which other CI tools would you see yourselves using with IB?

DISCLAIMER: this is not an official supported release

The final result will be a fully automated continuous integration flow which will build the project on every repository push event. This workflow has minimal dependencies on specific GitHub Actions or Incredibuild functionality and could be adapted for any build system.

If you already have a build system set up whether it’s Incredibuild or another build system, you can still follow-along but will have to make the appropriate changes. 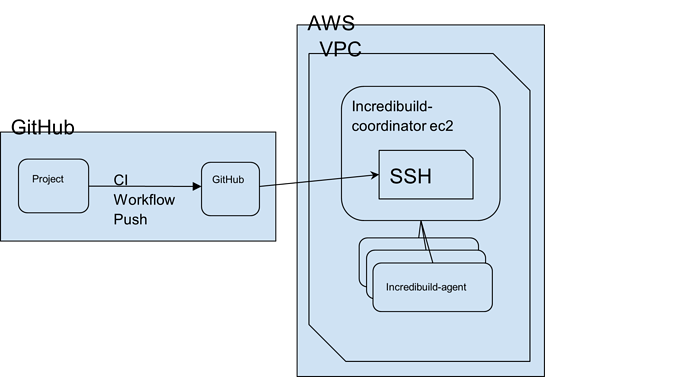 The build script will download the relevant code from GitHub and run the build. All the code and the build output will be available on the Incredibuild-coordinator server.

We will use SSH to secure the connection between GitHub and the Incredibuild-coordinator server.

Most Linux distributions should have the required command to create an SSH key, if you find that you don’t, you can connect to the Incredibuild-coordinator server and run the command from there.

-C “incredibuild-github-actions” : A comment to identify the public key

-f incredibuild-github-actions-ssh-key : The filename for the private key. The public key will be stored using the same name with suffix .pub.

-N “” : Key password - we keep it empty because we will use this in a non-interactive session

2 files should be created:

incredibuild-github-actions-ssh-key.pub - the public key which the SSH service on incredibuild-coordinator server will use to authenticate the validity of the private key

Connect to the incredibuild-coordinator server (you can right-click the instance in AWS EC2 console and choose “connect”) and run the following command to allow the key to authenticate. Replace PUB_KEY_CONTENTS with the contents of the incredibuild-github-actions-ssh-key.pub file:

We will use the opencv project which we used in the previous post.

Fork the repository to your GitHub account by clicking the “fork” button on the opencv repository main page.

The GitHub Actions workflow we will set up will require some secret values which we will add to the repository secrets.

In your forked repository - click the “Settings” button. On the left side-bar click on “Secrets” and click on the “New Repository Secret” button to add the following secrets:

Finally, enable GitHub Actions by clicking “Actions” in the settings side-bar, select “Allow All Actions” and click “Save”.

First, make sure there are available agents as once we commit the workflow a build will start. In AWS Console EC2 - click on “Auto Scaling Groups” and increase the “Incredibuild-agent” group capacity to 3 instances.

Set the file name to “incredibuild.yml” and paste the following contents:

This workflow starts an SSH session on the Incredibuild-coordinator server and uses it to Get the relevant code and initiate the build. Review the comments in the file for all the details.

Commit the change to your “main” branch and the action will immediately be triggered. You can see the running action under the “Actions” tab in your GitHub repository page.

You can see the action which ran on this repository by following this URL.

Now you can connect to the Incredibuild-coordinator server and get the build output from the build directory (using the BUILD_DIR value which appears in the action output).

In this post we saw how to integrate the Incredibuild system with GitHub actions to allow a CI workflow to initiate a distributed build of a large project. This example could easily be adapted to initiate via a different CI system - as we are using a simple Bash script and on the other side - it could trigger a different build tool, as it depends on a standard SSH service as the interface between the parts.